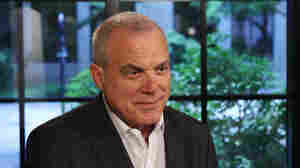 Aetna announced one of its largest pay hikes recently. CEO Mark Bertolini says he believes it largely could pay for itself by making workers more productive. Courtesy of Aetna hide caption

April 30, 2015 • Aetna, the giant health insurance company, raised its minimum wage this month. CEO Mark Bertolini says he expects the raise will pay for itself through increased productivity. 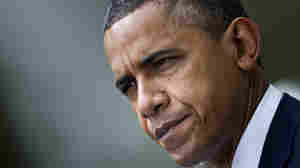 It's proving difficult for President Obama to win over Democrats on trade so far. Brendan Smialowski/AFP/Getty Images hide caption

Just Do It: Obama Tries To Sway Skeptical Democrats On Trade

April 30, 2015 • The president is finding it tough to get Democrats on board with a Pacific trade deal. He's meeting with some who might be open to it and even going to Nike headquarters next week for an event.

April 29, 2015 • The rule, which grew out of the Dodd-Frank financial overhaul bill, would make it easier for shareholders to see whether salaries are in line with a company's financial performance. 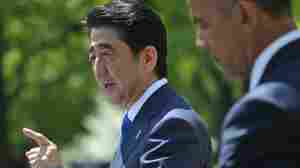 April 29, 2015 • The Japanese prime minister used his time in the spotlight in Washington to promote the Trans-Pacific Partnership, saying it would create both prosperity and peace. Democrats remain skeptical.

April 29, 2015 • The Securities and Exchange Commission introduced new rules Wednesday that will make it easier for shareholders to link executive pay with a firm's financial performance. 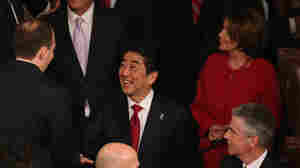 Prime Minister Shinzo Abe is greeted by members before speaking to a joint meeting of Congress, the first Japanese prime minister to do so. Mark Wilson/Getty Images hide caption

April 29, 2015 • Japanese Prime Minister Shinzo Abe laid out his vision of increasing ties with the U.S., and expressed his remorse over Japan's wartime atrocities. 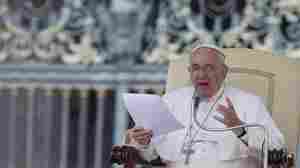 April 29, 2015 • NPR's Sylvia Poggioli reports that Francis' remarks, at his weekly general audience in St. Peter's Square, are some of his most forceful statements yet in favor of women. 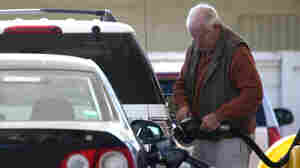 April 29, 2015 • The economy posted its weakest performance in a year, growing at a 0.2 percent pace in the first quarter. Analysts say that could affect the central bank's timetable for boosting rates. 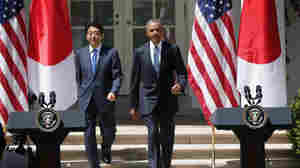 President Obama and Japanese Prime Minister Shinzo Abe approach the podiums for a joint press conference Tuesday at the Rose Garden of the White House in Washington. President Obama is hoping to finalize a new trade agreement with Japan and other Asian nations soon. Alex Wong/Getty Images hide caption

Obama Confident In Asia Trade Pact, But Track Record For Deals Is Spotty

Obama Confident In Asia Trade Pact, But Track Record For Deals Is Spotty 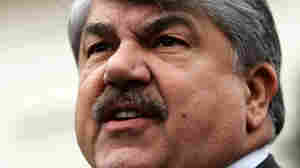 April 28, 2015 • Richard Trumka, president of the AFL-CIO, said presidential candidates can't "hedge their bets" when it comes to trade. But that's exactly what Hillary Clinton has done so far. 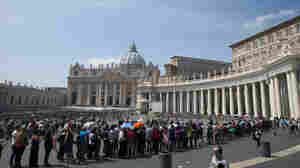 People line up to visit St. Peter's Basilica at the Vatican. Although flights to Europe remain expensive, the falling euro is still leading to a surge in American tourists visiting Europe. Andrew Medichini/AP hide caption

Europe May Be On Sale, But The Ticket To Get There Isn't

April 28, 2015 • The euro has dropped in value against the U.S. dollar by more than 20 percent since last summer. But even as Americans find bargains in Europe, flights to get there remain pricey for a few reasons.

Europe May Be On Sale, But The Ticket To Get There Isn't 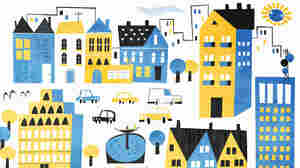 Our modern relationship to property — namely that it's burdensome to own, and therefore less valuable — has allowed the sharing economy to expand. Gustav Dejert/Ikon Images/Corbis hide caption

April 27, 2015 • The number of people using these services is growing fast. Find out what happens when a writer rents out his Mini Cooper and an Airbnb tenant learns something terrible has happened to his host. 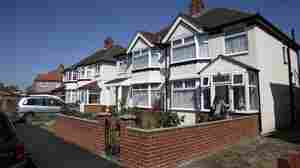 A reporter stands outside the front door of a house registered to a trading company operated by Navinder Singh Sarao in Hounslow, west of London. on April 22, 2015. Sarao was arrested in connection with the Wall Street flash crash of 2010. Adrian Dennis/AFP/Getty Images hide caption

April 25, 2015 • The cause of Wall Street's flash crash has been debated ever since it happened. Officials arrested a lone trader working in his parents' London home, but some question whether he was really to blame. 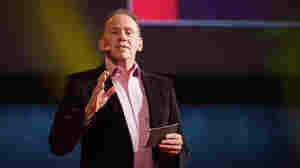 "Why does everyone have to be here at the same time? Why do we need to know how many hours a week people work?" — Ricardo Semler James Duncan Davidson/TED hide caption

Ricardo Semler: What Happens When You Run a Company With (Almost) No Rules?

April 24, 2015 • When Ricardo Semler became the CEO of his father's company, he reorganized it with the belief that less management and more flexibility meant a better workplace and bigger profits.

What Happens When You Run a Company With (Almost) No Rules? 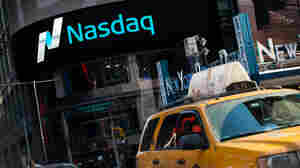 As the Nasdaq closes above the record set 15 years ago, stock analysts are debating whether the market is approaching another bubble. Bryan Thomas/Getty Images hide caption

15 Years After The Dot-Com Bust, A Nasdaq Record

April 23, 2015 • The Nasdaq has closed at a new high. It last peaked just before the dot-com crash, and "Nasdaq 5,000" soon became code for stock market bubble. Does the record hold any of the same warnings today?

15 Years After The Dot-Com Bust, A Nasdaq Record